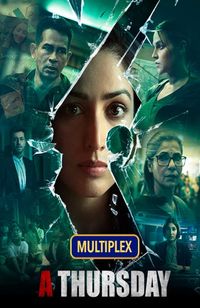 A Thursday 2022 All cast and crew Stars

Where to Watch A Thursday 2022

A Thursday follows the story of a school teacher who holds 16 children hostage at a pre-school. What is her demand and her story? The story here is quite interesting with a socially relevant message at the end.

The journey is interesting too but not without its share of flaws. Before getting to the screenplay I would like to mention that I hadn’t watched its trailer(I usually don’t), and I was pleasantly surprised by it. The story wastes almost no time in getting straight to the point.

While parts of it might seem far fetched or slightly wobbly in its writing, the drama is gripping and there is urgency maintained throughout. While you are least expecting it, s**t gets real almost 50 mins into the film with an event that commands your attention. As the screenplay progressed, I could draw a few parallels to the 2008 sleeper hit A Wednesday.

The beats of the screenplay were quite similar. The issue that I had with this film though was its length. A tighter edit would have ensured that the drama would have been atleast 20 minutes shorter. But the drama is designed such that it doesn’t allow your attention to waver and instead it holds your attention for most parts.

You would often question as to where the drama is headed. But the good news is that it all comes together well at the end. The mystery element and the final reveal are good in what turned out to be a high voltage drama. And the final message is a good one and very relevant as well. Overall, a pretty good screenplay.

A Thursday was released on Feb 17, 2022 and was directed by Behzad Khambata .This movie is 2 hr 8 min in duration and is movie available in Hindi language. Yami Gautam, Neha Dhupia, Dimple Kapadia, Atul Kulkarni, Maya Sarao, Karanvir Sharma, Kalyanee Mulay and Boloram Das are playing as the star cast in this movie.

You can watch the movie online on Hotstar, as long as you are a subscriber to the video streaming OTT platform. A Thursday is a brilliant movie to watch in the Crime, Drama and Suspense and Thriller genres.